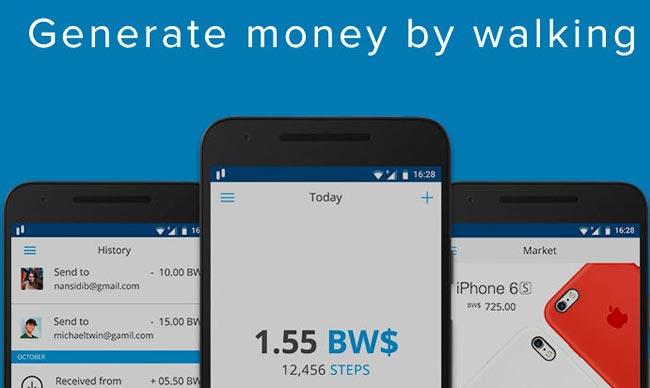 In a bid to make people walk more, a London-based startup is introducing a new app that pays people in digital currency based on the number of steps taken per day. ‘Bitwalking’ will soon be available on Android and iOS users in the UK, Kenya, Malawi, and Japan.

Bitwalking’s currency units are called ‘Bitwalking dollars’ or BW$. Users need to walk a total of 10,000 steps (five miles) to earn BW$1, equivalent to $1. The maximum money that can be earned per day is BW$3. The money earned can only be spent in the app’s inbuilt marketplace, or exchanged for real money.

According to the company’s website, Bitwalking will be most relevant in developing countries, where rural workers don’t earn more than a dollar a day. So by walking around with a tracker, they could potentially earn three times more. “We believe that everyone should have the freedom, the ability, to make money,” the website states. “A step is worth the same value for everyone – no matter who you are, or where you are. What matters is how much you walk.”

While the company hasn’t exactly explained how the app works, the mechanism is believed to be reliable enough to verify the exact number of steps made by the user. “With Bitwalking you simply generate money by walking,” the website explains. “The free app converts steps to Bitwalking dollars (BW$) that you can manage and use as you wish. The money you generate accumulates each day, and remains in your account until transferred or spent.”

“The Bitwalking Dollar is real money. This is not a rewarding system, points system, mileage system, game or fitness app.”

According to a BBC report, “The idea of Bitwalking is to take advantage of the trend of fitness trackers by offering an additional incentive to keep fit.” It’s a scheme, essentially, that plans to partner with sportswear brands and health services, insurance firms, environmental groups, and eventually, advertisers who stand to gain from more insights about the target audience. If it works, it could be an ideal win-win situation for users and companies.

Co-founders Nissan Bahar and Franky Imbesi have attracted over $10 million in initial funding from Japanese investors to help launch the currency and set up a bank that verifies transfers. They hope that more online stores will accept Bitwalking dollars in the future. They claim that a few shoe brands have already expressed interest, but their names haven’t been revealed yet, and a UK bank is apparently ready to partner with Bitwalking at one of the nation’s biggest music festivals next year.

BBC points out a potential pitfall: “It is still not clear how a currency that appears to be so easy for users to produce could maintain its value, nor if the initial funding for the scheme will be sufficient to sustain it in the initial period while confidence in its value is being built up.” There are also concerns of privacy: “Because the new scheme necessarily tracks its users there will be data available that could be particularly valuable to advertisers and accompanying concerns over privacy.”

However, Bahar insists that the data collected won’t be for sale. “We may explore offering advertisers the opportunity to focus on different groups depending on how active they are, but we won’t pass on any information relating to individual’s movements.”

“It’s a currency that can be earned by anyone regardless of who they are and where they live,” Imbesi added. “For some it will be a free cup of coffee a week perhaps offered by local businesses to encourage people to explore their local shops. For others it could be a game changer, transforming their lives by enabling them to earn and trade in the same way with the rest of the world.”

“And all while encouraging us to protect the planet and stay healthy.”