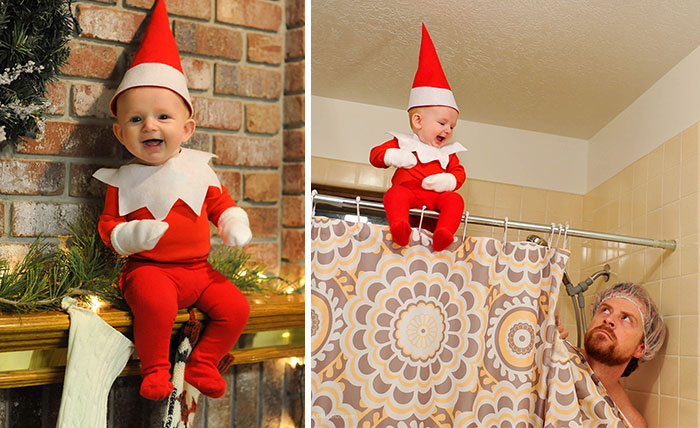 Utah’s dad-of-six Alan Lawrence decided to take the famous Elf on the Shelf Christmas tradition to the next level by turning his own 4-month-old baby boy Rockwell into the cutest elf ever. He made up a whole story about his own little elf and started documenting his mischievous adventures on his That Dad Blog. Lawrence’s wife helped him by making Rockwell’s costume.

“All of our friends do the Elf on the Shelf and I’ve always thought it was sort of creepy, but sort of fun — this idea of an elf coming to live in your home and moving around to different places,” Lawrence told TODAY. “And I’m like, what if it was a real elf? And of course, being parents, we already have the cutest little 4-month-old. So we decided to make a fun series.”

Lawrence plans to post new pictures until Christmas. Some of the photos feature the little elf in seemingly dangerous situations, but you shouldn’t be worried because his daddy, being an art director, is quite skilled at photo editing. “He’s just a good-natured kid, he’ll be laughing and looking up at me, exactly what we need for the shot” These adorable adventures will keep going up until Christmas, so be sure to get your daily cuteness intake!