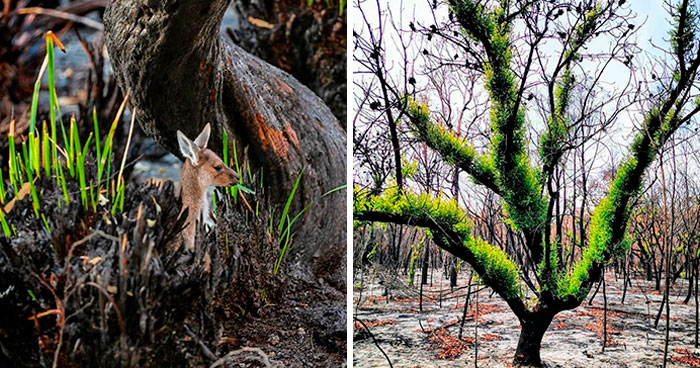 For the last few months, Australia has been tormented by natural disasters caused by extreme weather, from destructive fires worsened by drought, to flash flooding that occurred when that drought suddenly ended.

While the southern states of Victoria and New South Wales aren’t out of the woods yet and many fires are still raging, photos show that life goes on in the areas that the fire already passed through.

Plants that have evolved to shield their buds from fire so they can quickly resprout after being burnt at the surface, or even take advantage of the nutrients in ash, are called pyrophytic plants. It’s not uncommon to see them blooming en masse after a devastating fire, and the brilliant greens and reds against the blackened landscape have a stunning visual effect. But even though the cycle of being burnt and growing back again is normal for Australia’s vegetation, the plant and animal survivors still face challenges.

In 2011, following a 2009 fire that was the most deadly to humans in Australia’s history, it was observed that previously unknown and rare plants had emerged in Victoria’s Kinglake National Park. When fire clears out the vegetation cover preventing light from reaching the forest floor, dormant seeds lying in wait in the soil have a chance to flourish, allowing the ecosystem to start off on a new foot.

The current disaster completely eclipses that fire or any yearly fire season since then in terms of the amount of land consumed, though, and just because Australia’s ecosystem has the ability to bounce back from fires, that doesn’t soften the blow of the human and animal suffering that have taken place as immediate consequences. Worse yet, scientists say that more intense summer temperatures and droughts in recent years are making large-scale fires more likely as well as increasing the duration of the fire season.

Organizations working to rebuild communities have had to send a word of caution to people abroad who want to help, though. Some organizations have received so many boxes of blankets and mittens for recuperating animals that they no longer have a place to store them and also aren’t too pleased with the environmental impact of international shipping.

People like to donate material goods because they feel like they know exactly what they’re being used for, but Juanita Rilling of the US Center for International Disaster Information urges people to realize that it is tremendously more practical to identify and send financial donations to organizations providing assistance to the animals and people that have lost their homes.