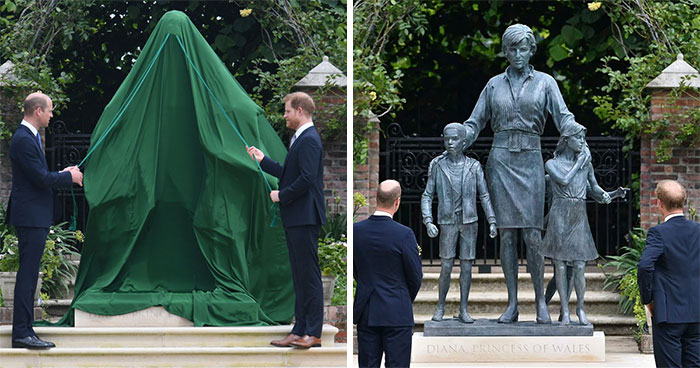 On Princess Diana’s 60th Birthday, Her Sons Prince Harry And Prince William Honored Their Mother By Unveiling Her Statue

On July the first, Princess Diana would have been celebrating her 60th birthday. But even after her tragic death due to fatal injuries from a 1997 car crash in Paris, she remained in people’s hearts and this year at Kensington Palace, a statue was revealed celebrating her life and work.

The statue that is meant to represent ‘warmth, elegance and energy’ was unveiled by her two sons, Prince William and Prince Harry this Thursday, finally coming together for a beautiful cause after quite a frictional period in their personal life. At the ceremony in the gardens of the palace, the smartly dressed princes presented the statue and released a statement for such an emotional day for them and many people admiring the late princess.

A statue of Princess Diana, the design of which was kept a secret, was unveiled in an event held on what would have been her 60th birthday

As the design of the statue by Ian Rank-Broadley was a secret, the public was finally able to see the final piece being revealed. The renowned artist is probably most famous for his image of the Queen, which made it onto all the coins in the UK and Commonwealth since 1998. It seems to be inspired by Diana’s Christmas card from 1993—which was the first one to be without Prince Charles, who was also not present in the ceremony in Kensington Palace. In the picture as well as in the statue, she is wearing the same shirt and a skirt followed with a belt with a large buckle. Yet in the picture on the card, she is with her two sons and in the statue, she is posing with three children, two of whom are barefoot.

‘Every day, we wish she were still with us, and our hope is that this statue will be seen forever as a symbol of her life and her legacy.’ – shared The Duke of Cambridge and the Duke of Sussex in a joint statement. ‘Today, on what would have been our Mother’s 60th birthday, we remember her love, strength and character—qualities that made her a force for good around the world, changing countless lives for the better.’

A skirt, shirt and a belt were an outfit that the Princess was noticed wearing a few times

“The portrait and style of dress was based on the final period of her life as she gained confidence in her role as an ambassador for humanitarian causes and aims to convey her character and compassion,” the statement also read.

The statue was placed in the Sunken Gardens, a place favored by Diana that was always abundant with lush flora displays and the Princess’s favorite flowers. The statue is complete with an engraving of Diana’s name and the date of unveiling. Right in front of the statue on the ground, there is a plate reading a verse from the poem “The Measure of a Man.”

The event honoring Princess Diana’s life in Kensington Palace was private and only broadcasted after it was over. The two princes were seen speaking after the unveiling of the statue as recently their relationship has been going through a lot of tension due to differences and recent family-related issues. The event was dominated by Princess Diana’s relatives and the two brothers were captured conversing to a few different event attendees. Outside of the palace, hundreds of people also gathered to honor the memory of Diana on her 60th birthday as well as a few super fans dressed up and armed with national regalia.

Although the event was private, hundreds of people gathered outside the gardens for the unveiling of the statue

Many ultra fans of Princess Diana were also around, dressed in elaborate outfits followed by the national symbols of the country