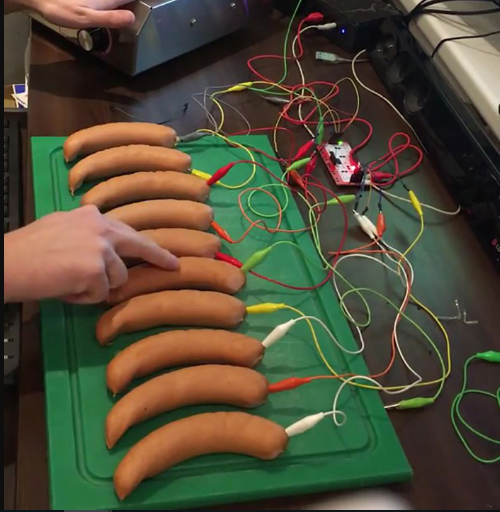 The internet is full of many interesting things. Most of them are quite useful and even amazing, but the rest is often unnecessary and weird. And you gotta love it because there is probably no better outlet for creativity than the internet, regardless of what shape or form it might come in.

Meet Patrick from Patrick’s World, who has flexed his creativity muscle in a way that probably nobody has ever thought of. He took out some traditional German sausages, hooked them up to some wires that were connected to a number of sound equipment, and made a fully functional piano. Yes, you read that correctly.

The internet is full of random, yet wonderful things, and now there’s also the sausage piano

Patrick runs a blog called Patrick’s World, and as its slogan proudly proclaims, it’s a blog dedicated to purely wasting time. However, I wouldn’t say it’s a complete waste of time because Patrick did end up creating probably the world’s first—and maybe only—piano made of sausages.

So, he uploaded a video of his musical setup to the internet back in January of 2019, but it has only now surfaced on the internet, drawing the attention of many Internauts. In the video, we see, supposedly, Patrick testing out his invention called the Bockwurstklavier, or Bockwurst Piano. A Bockwurst is a traditional German sausage made from ground veal and pork.

The piano consists of 10 sausage keys, each of which is hooked up to a wire that leads to a circuit board and other sound processing equipment. Whenever Patrick touches a sausage whilst also touching the piece of equipment in the background, the “machine” produces piano sounds.

The keys work either by touching them individually or collectively, as shown in the video, so it is possible to play full chords and, hence, a number of tunes. As long as there is contact with another bit of electrical equipment, touching the sausage keys produces sound.3

As the video shows, different piano tones play as soon as Patrick touches the sausages

It’s possible to play multiple keys (sausages) at a time, which means that it allows for full chords

Now, the piano falls short of a full octave as it would require 12 keys—7 natural keys (the white ones) and 5 sharps and flats (the black ones). However, there are only 10 keys, which is probably the standard number of sausages in a single package, but you know what, it still provides excellent results as it definitely sounds like a piano despite it literally being a sausage.

Internauts thought this was an excellent piece of musical machinery with many laughing at how random, yet purposeful, it all is. While some praised this fine bit of German engineering, others joked inquiring if there is also a Leberkäse version, which is yet another meat product in Germany made from beef, pork and bacon, similar to bologna sausage.

Though it only has 10 “keys”, it’s more than enough to play many songs and melodies

Definitely not the wurst idea that has graced the internet, that’s for sure.

This isn’t the first of Patrick’s musical endeavors as there also was another video of him programming musical loops to be activated upon the touch of Radeberger beer cans, as seen in this video. Would be quite handy for dance raves or Octoberfest.